Whenever I visit a city I make sure to spend some time sketching. I do this partly as a way to slow down and pay attention to where I am, and partly as a journal to help me remember more details about the trip later.

These sketches feel very different than the ones from when I’m not traveling. There’s a loose, fast energy to them. I think this is a direct result of the way I feel when I’m making them. I usually feel an overwhelming rush to get them down, a mad dash to capture all of the inspiring and beautiful things I’m seeing, and a sense of being excited to move on because I know there are thousands more things to draw.

But I think another reason is simply the feeling of being outside in a city. When I’m outdoors in a city, I feel like I’m part of the energy of the city, and that energy is reflected in the drawing. The scene is large, an entire horizon sometimes, compared to a single cup or flower drawn inside for example, so the amount of visual information and energy is completely different. I like thinking about how cities are like are self-organizing organisms and that we are like little cells, driving along the blood stream in our cars and trains. I love cities because they are clusters of creativity, discovery, and possibilities.

“But you know all pictures painted inside, in the studio, will never be as good as those done outside. When out-of-door scenes are represented, the contrasts between the figures and the ground is astounding and the landscape is magnificent. I see some superb things and I shall have to make up my mind only to do things out-of-doors.”

So this chapter is about three cities. The one I grew up in, one that is a home away from home, and one that is a new acquaintance. 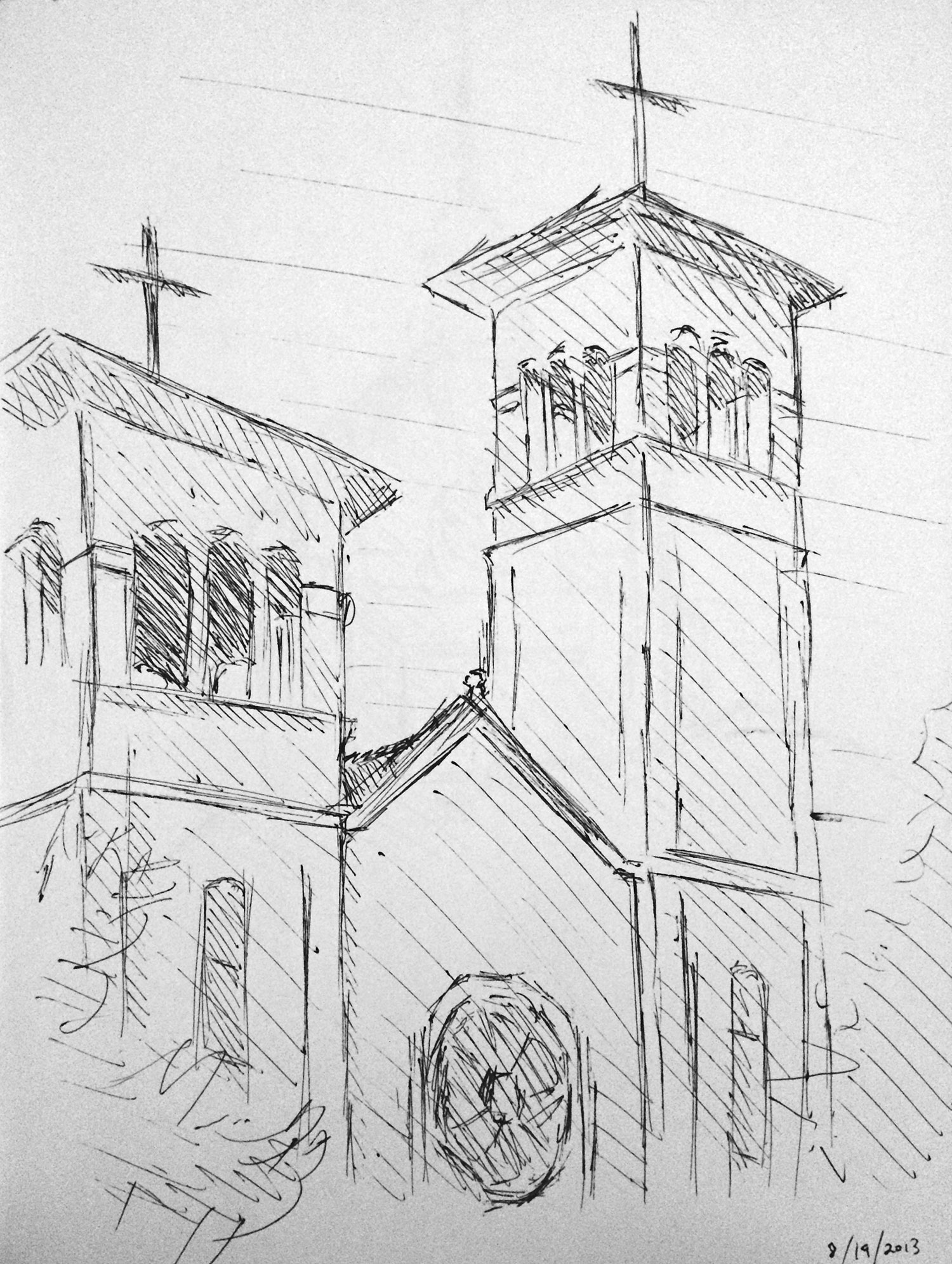 This is St. John the Evangelist Catholic Church. They have a homeless shelter, and a church service for people who are deaf every Sunday. I see these two towers every day when I leave home. 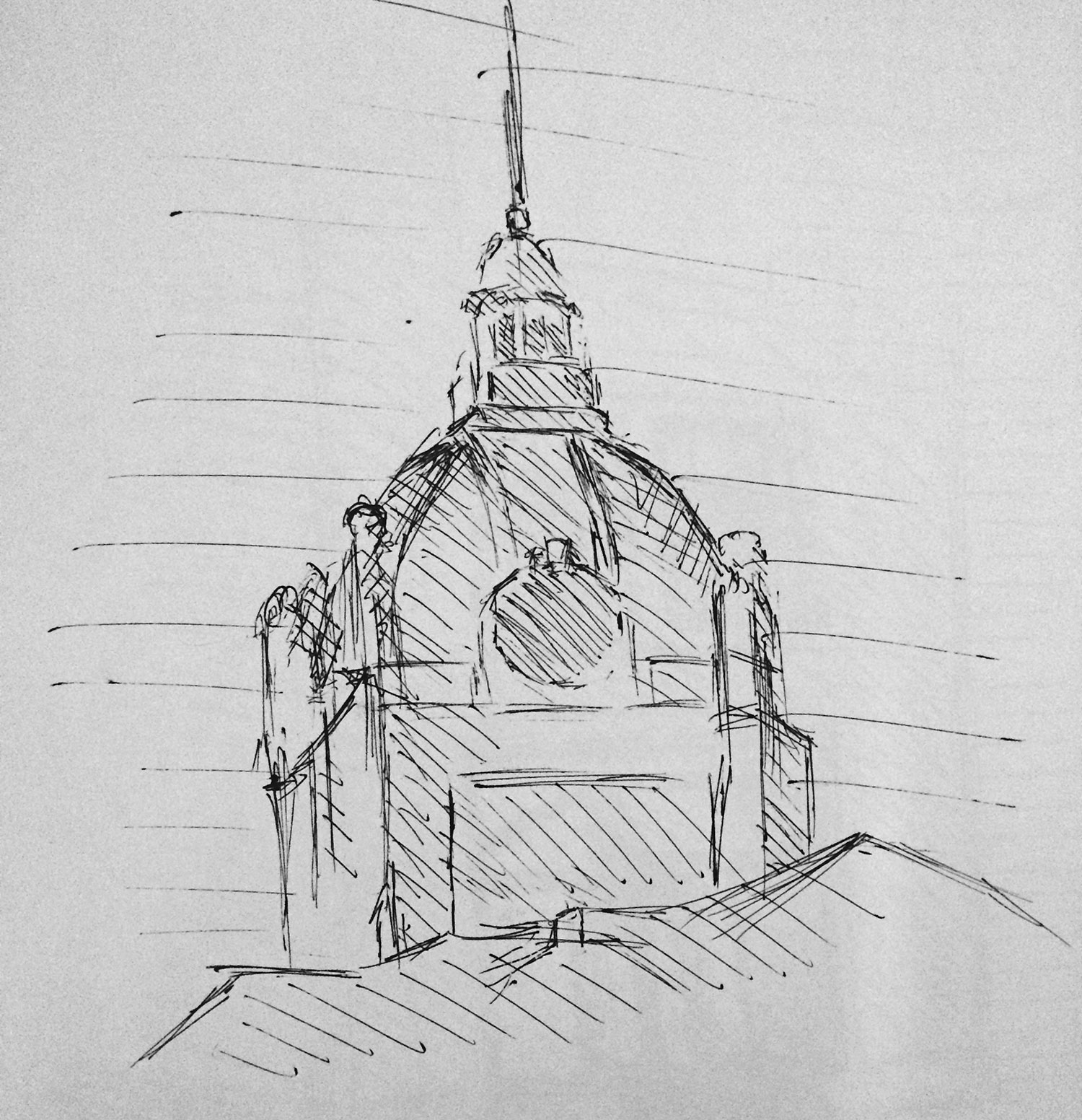 The Brown County Courthouse is one of the most noticeable and recognizable buildings in downtown Green Bay. It’s right in the middle of the downtown area, and I think it serves as a good focal point for the city. Designed by Charles E. Bell and completed in 1908. 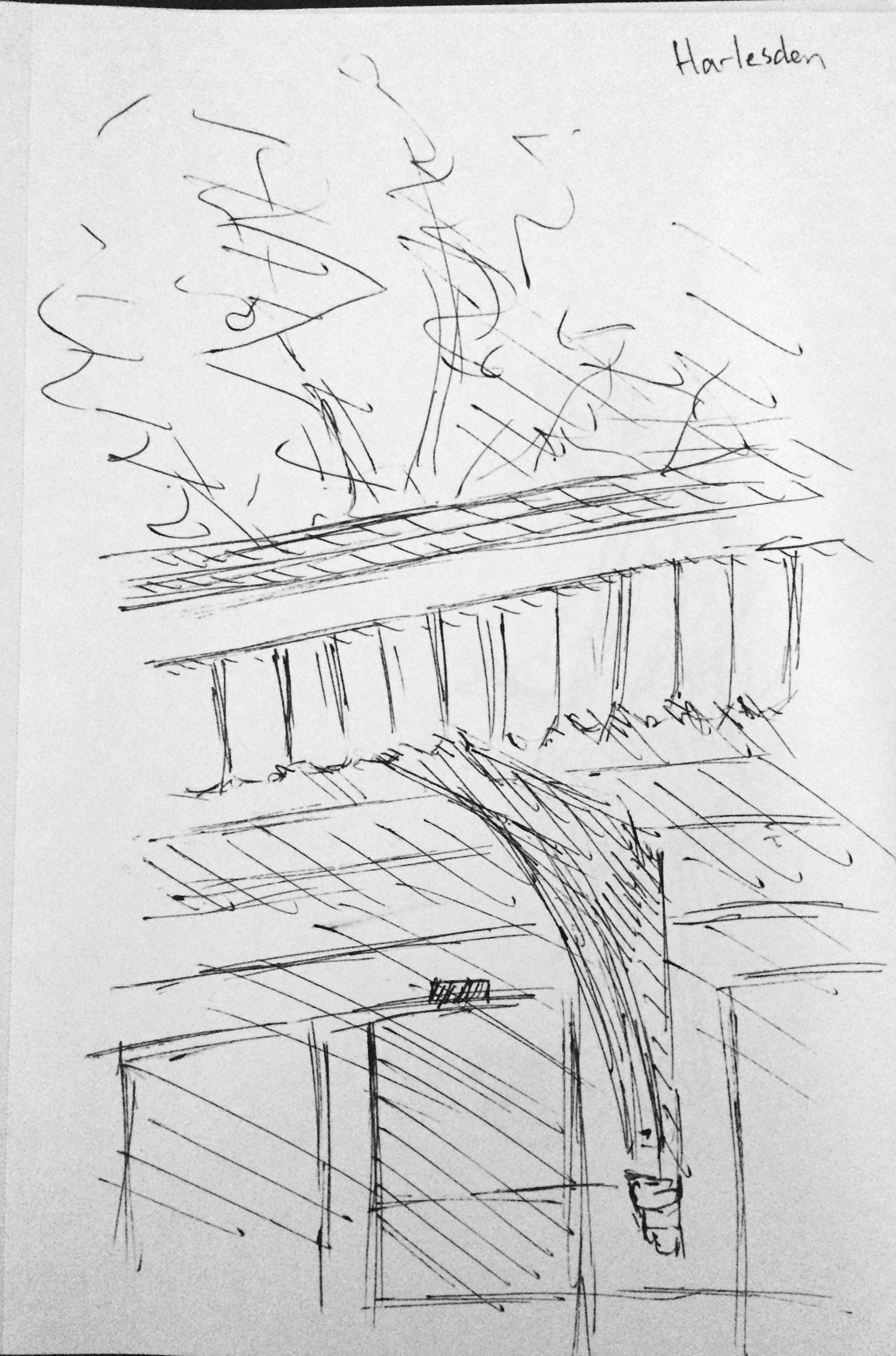 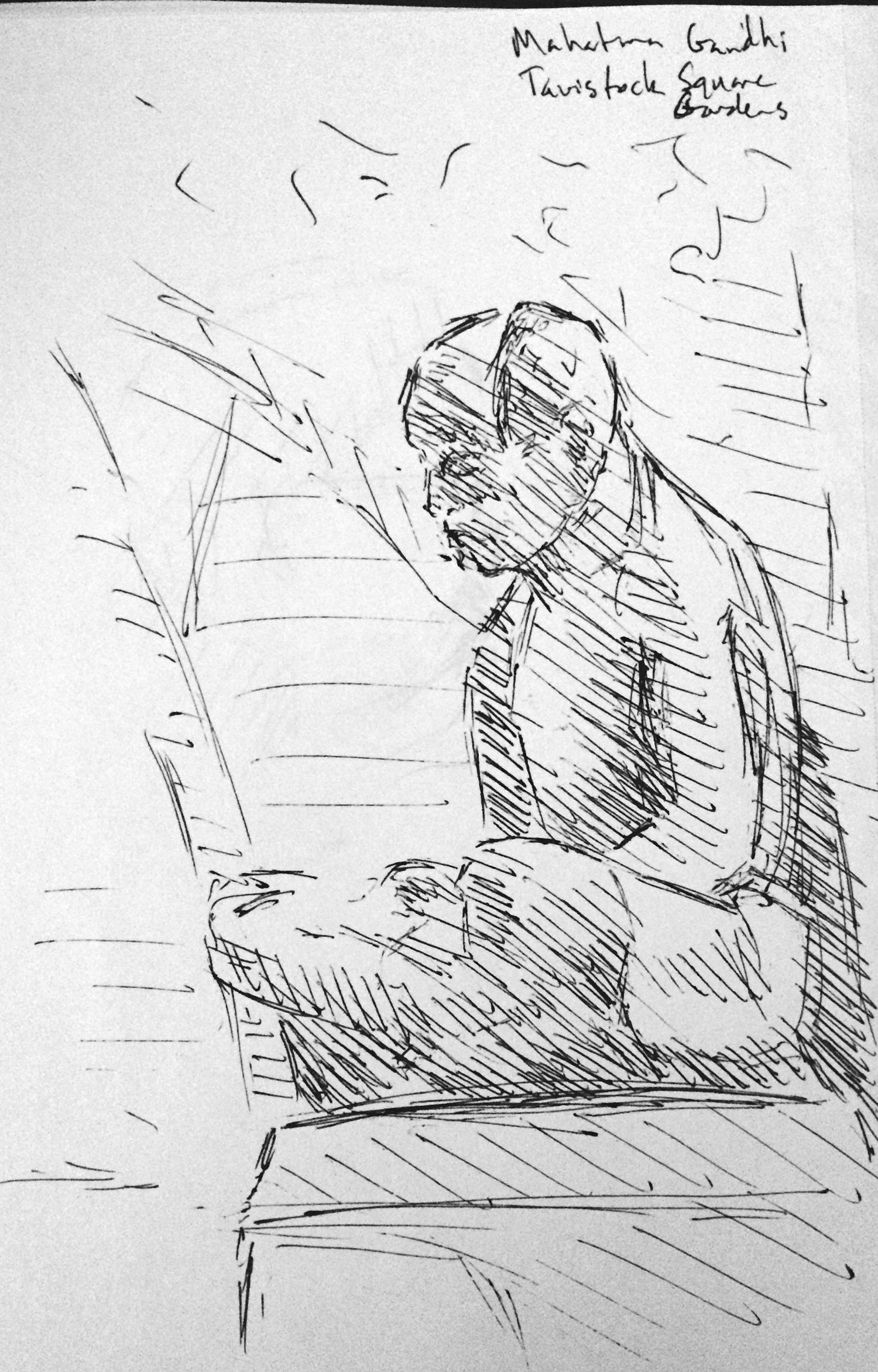 This is my one of my favorite areas in London. The Mahatma Gandhi statue in Tavistock Square Gardens, in central London, right near Euston Station and University College London. This statue is right in the middle. People leave flowers. The statue is by Fredda Brilliant, a polish artist, born in 1903. It’s a true centerpiece, and sets the tone for the whole square. 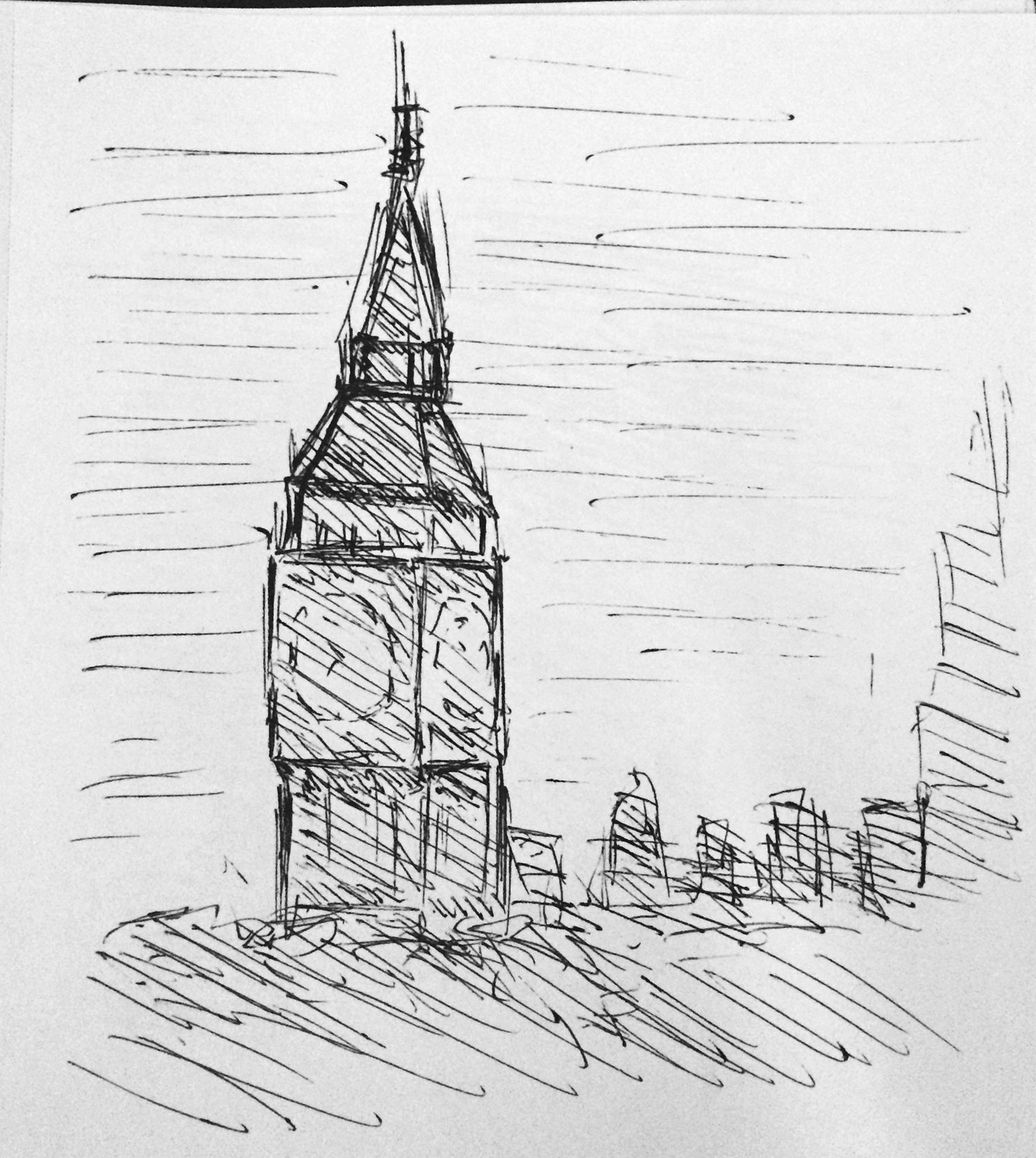 This is a view of Big Ben from the steps of the National Gallery in Trafalgar Square. Something about this view always reminds me of how important balance and design are in the way a city is arranged. 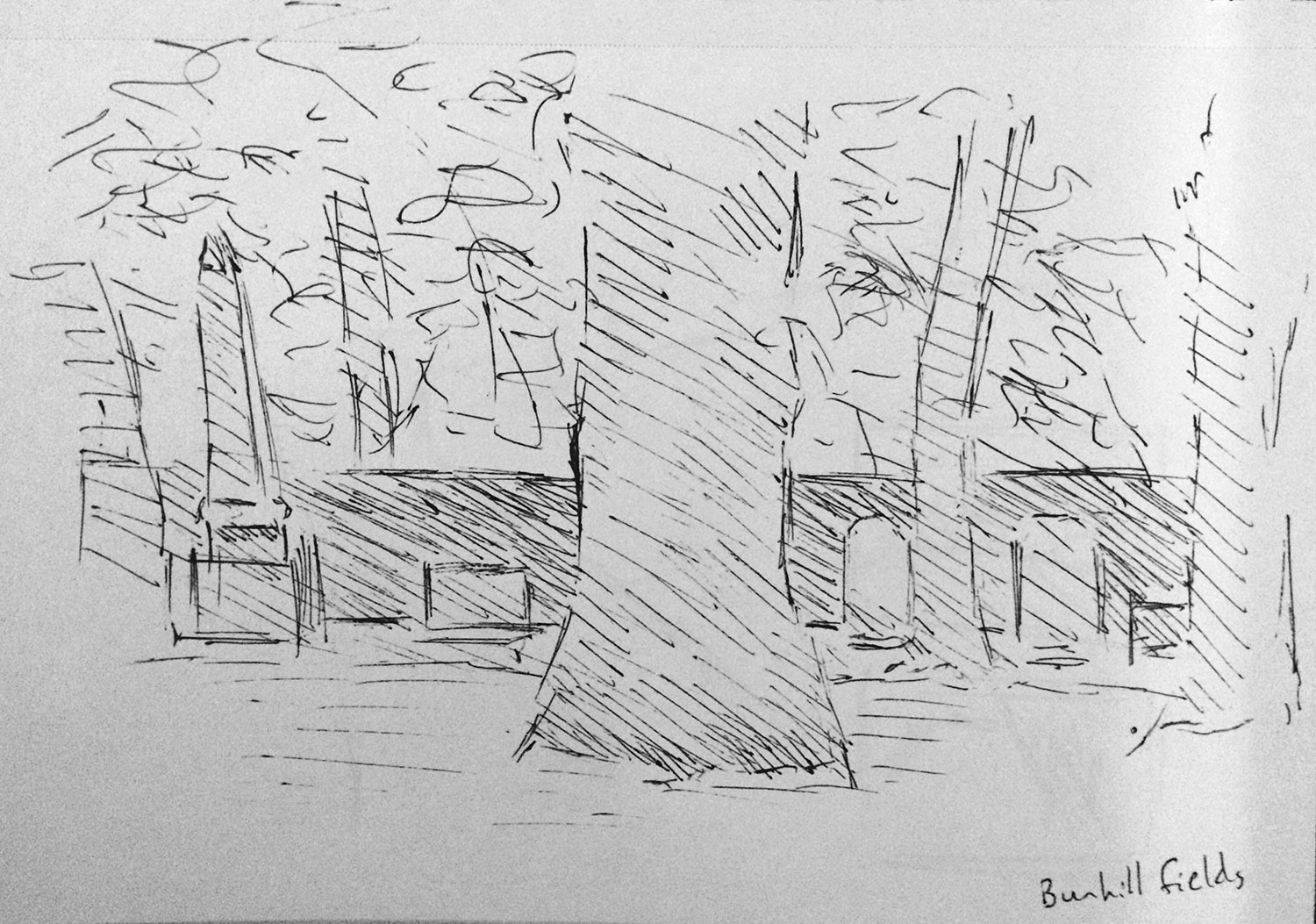 Bunhill Fields is an old park in London. It’s actually a graveyard, a very old one, but it’s a graveyard full of life. A park in a big city attracts a lot of people, even if it’s a graveyard, because they’re quiet and offer a break from the usual rush of traveling around the city. At Bunhill Fields there were children playing, people feeding squirrels, people simply walking through, either as a shortcut or as a scenic route or both. Everyone was smiling, peaceful, and friendly. The contrast when I left the park was striking. The rush of the city and the quiet of the park are both beautiful. Sometimes you need a little of each. 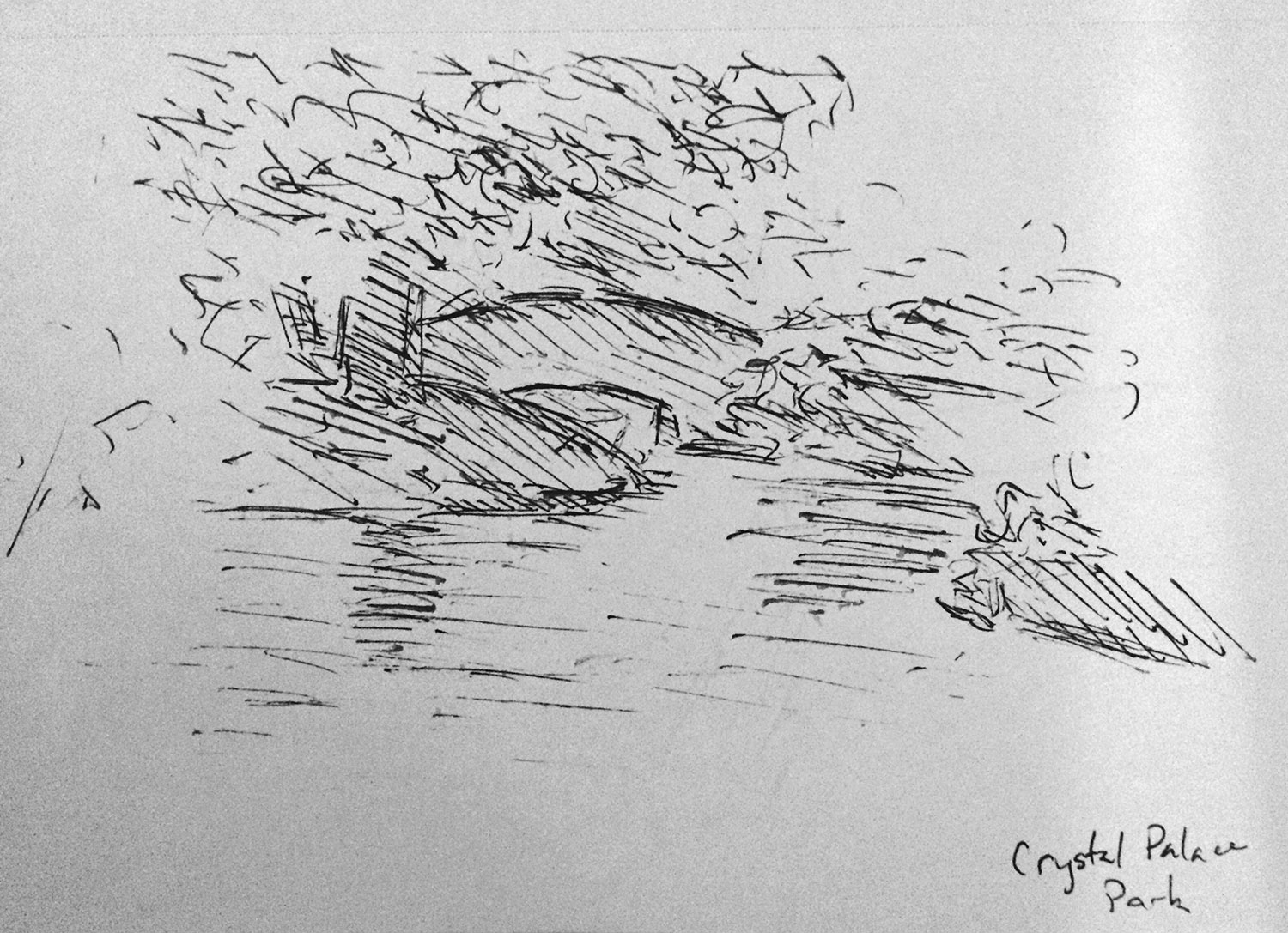 During the trip we stayed near Crystal Palace Park and I took a walk through it on a rainy day.

I visited San Francisco for the first time recently. I was lucky enough to have a flight cancelled, because almost all of my drawings from the trip were done after I was supposed to have already left. San Francisco made a strong impression. It felt like a completely different world. 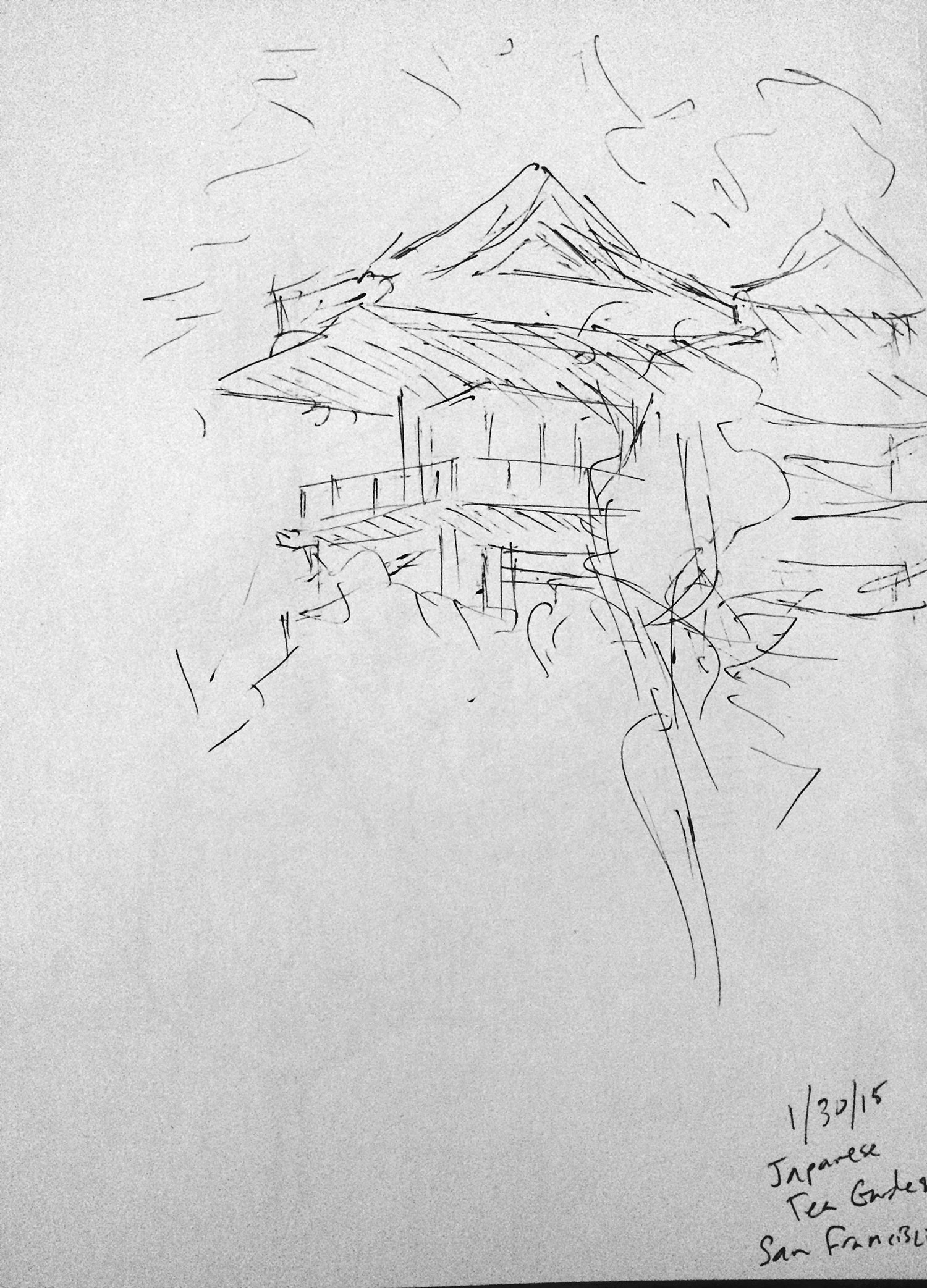 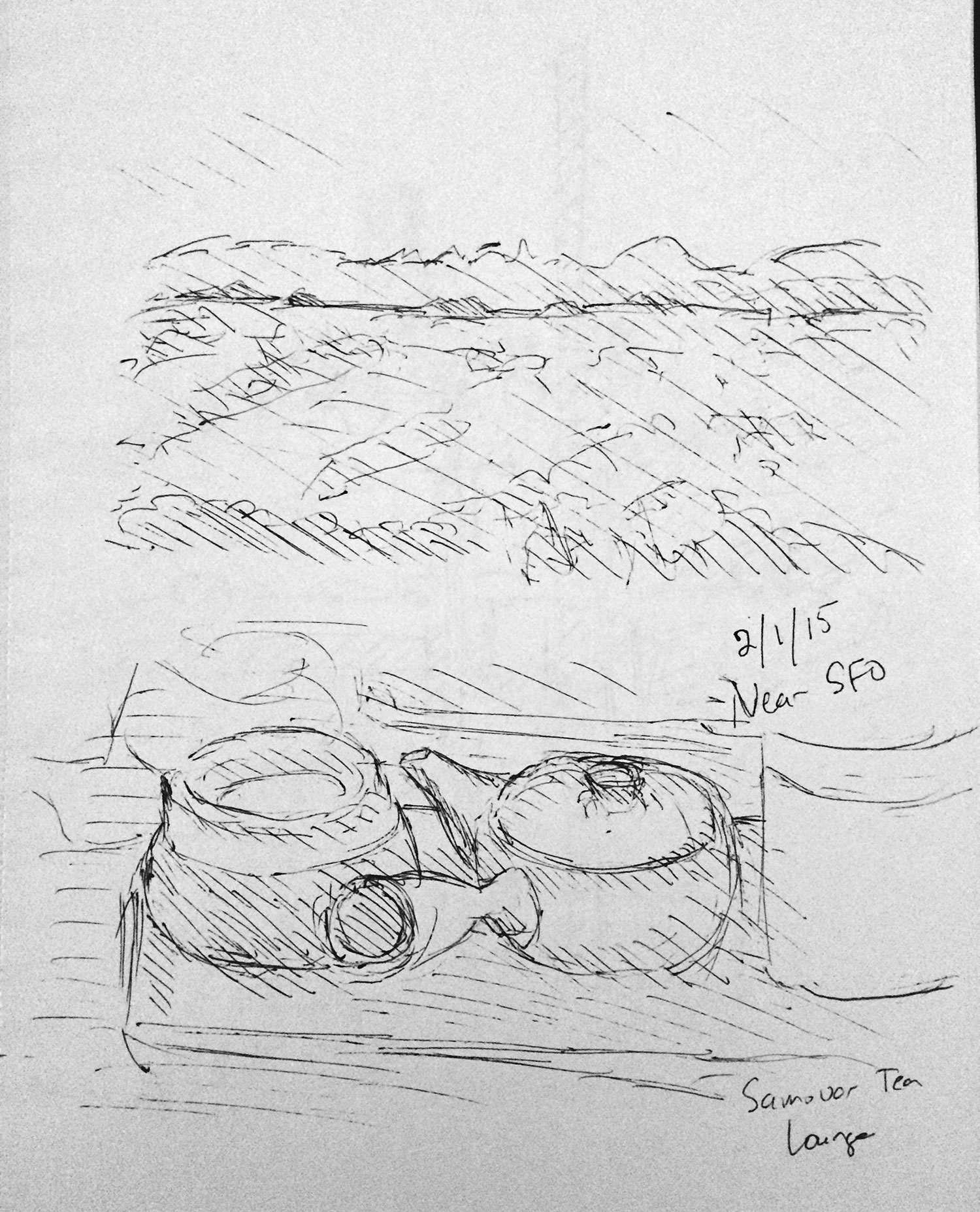 A view through the airport window while waiting for the flight that was eventually cancelled, and later that day drinking gyokuro green tea at Samovar Tea Lounge. 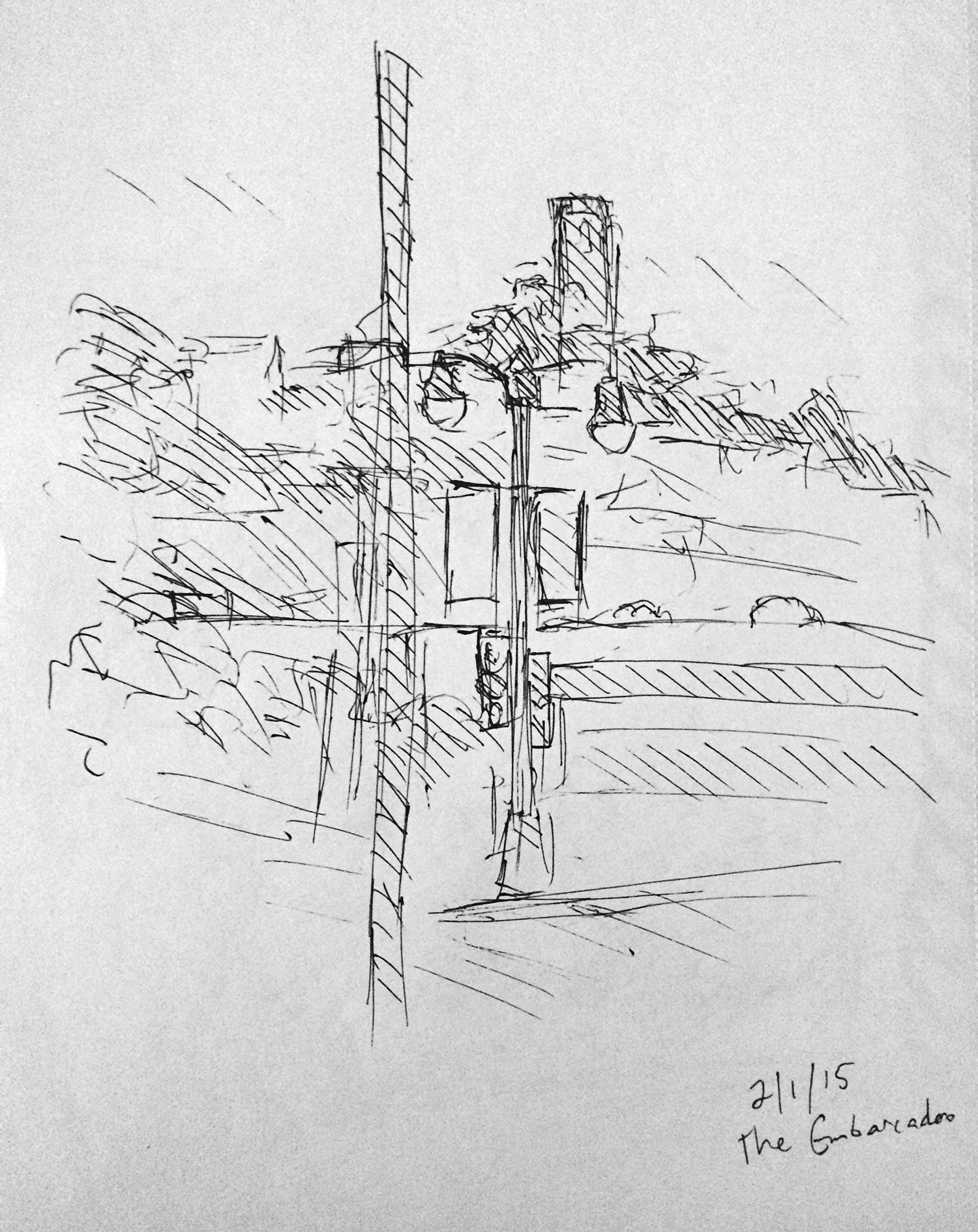 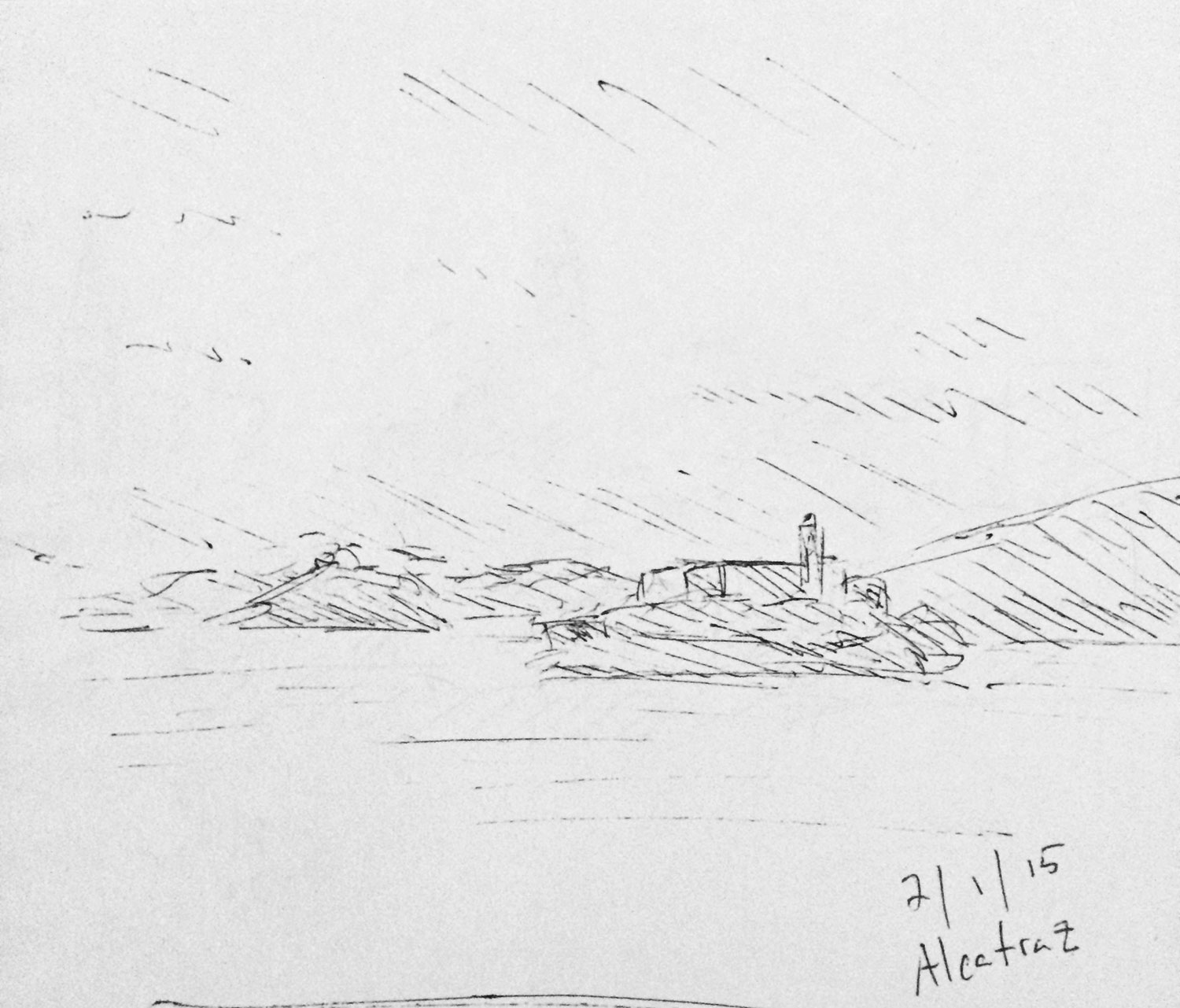 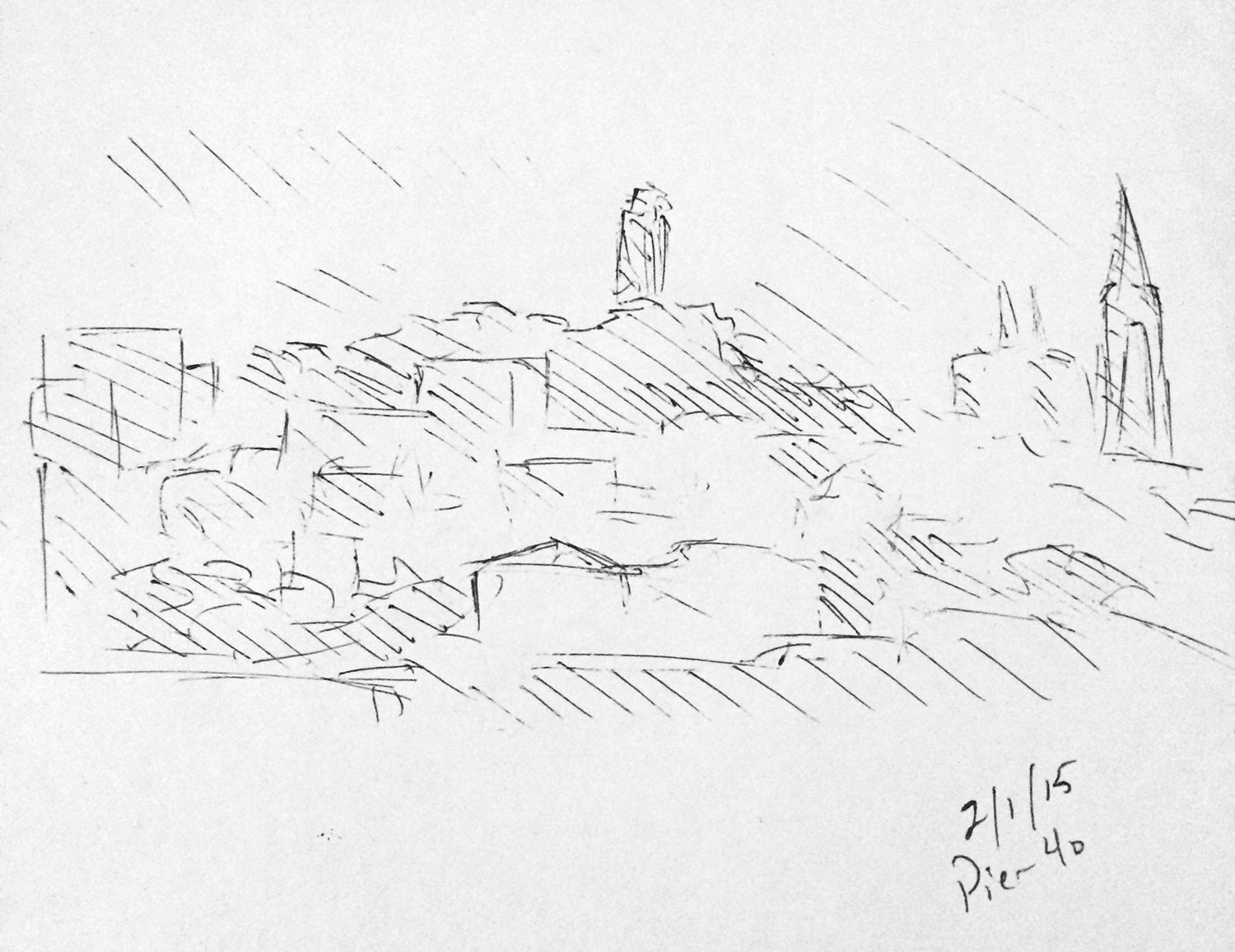